← Pause …
The Simplicity of Repetition →

It all started with an invite from YTL Communications to head up to The Great North [Penang] to test the speed of Yes 4G.

And eat and eat and eat until I resemble a spider [Imagine if you will, small tiny limbs protruding out of a creature with a huge, ballooned abdomen].

Yes, by YTL Communications, is Malaysia’s first 4G network provider that promises speeds 3-5x better than 3G. I will be honest : When YES first launched I was skeptical : FASTER than 3G, really? But the infrastructure in Malaysia is SO CRAP, 3G speeds are more like GPRS speeds and because of the lack of towers, it REALLY REALLY drains battery life on your Smart Phone. As proof, I subscribed to the local 3G services while in New Zealand and Singapore and was pleasantly surprised with the speed. Obviously when I came back home I would be stabbing myself to death with a teaspoon trying to await my twitter feed to load or an email to download. C’mon c’mon I wanna watch Joseph Encinia’s ROCKING USA Nationals routine!!!

OH, and did I add – When working mobile-ly, I’d have to offer libations of Guinness and promise to do 25 Backward Bends [ugh!] to the Gods of WiFi that the connection is stable and fast. NOOOO not the spinning loading wheel of death NOOOOO!

And so for the most part, I’ve put up the very slow, inconsistent speeds of Streamyx and my mobile 3G internet provider. Enough is enough.

With the entry of Yes into the mobile broadband market, they have shaken up the game plan. High speeds? Yes please! Pay for only what you use? Yes please! Because why would you pay for “unlimited usage” when you get substandard service? 😉 Get this : Yes has also graciously covered the ENTIRE North-South highway so you can REALLY stay connected!

CEO of YTL Communications, Wing K Lee. Super nice. Saw me wandering around the lobby looking lost and lonely [or rather, like a destitute prostitute at 8am on a Saturday] and said  HI to me.

*Pictures above courtesy of Ee Ping.

OK OK. Enough pictures of dashing men in suits. Time for what you have been waiting for … THE FEAST.

And our first stop was at … Bidor! Our little convey [consisting of the lovely Arystle, charming Kelly and ever-heart-attack-ready James] practically wept in joy upon seeing the sign. Yes, we were starving. But of course, I took the opportunity to TEST out my little device called Huddle. Though of course, nothing that involves me is without blonde ambition :

– Is your battery in?

Oh the withering look I got from the client. 😀

Average speeds BEFORE stopping at Bidor were :

Hmm. So far, so good. This meant streaming Joseph Encinia’s WINNING routine WITHOUT interruption, WITHOUT intermission. 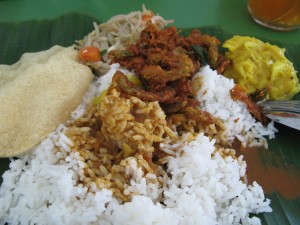 This, my friends, is what addiction looks like. For my international friends / great big yoga family, it’s rice on banana leaf topped with curry [fish or chicken, your choice, or both! 😀 ] or dhall, and with a papadom [fried cracker, shown on left], and 3 types of veggies. You may opt to add on side dishes such as lamb, mutton, fried fish / chicken etc. As to why there are NO pictures of it? Well, I was too busy wolfing the food down.

After rolling around… James of YTL apparates out of no where and brought back ….

Ladies and gentlemen! Please note that this is the INCORRECT way of eating Duck Noodles. Arystle and I were SO EXCITED with the prospect of MORE FOOD that we greedily put the soup and the noodles in the same bowl, when it should have been separated out. Ah well, no worries.

The CORRECT way to eat Bidor Duck Noodles : Soup in 1 bowl, noodles on the side. 😀

And this is a bunch of KL-ites trying to haphazardly cross a road in Ipoh : 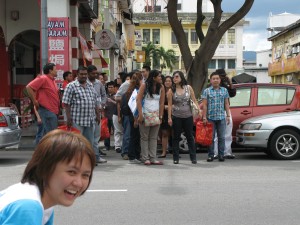 NEXT UP : It was our group’s turn to get into the Sprinter [affectionately known as Vomit Car as the driver was CRAZY].

Arystle, Myself, Kelly and Yoga in the Sprinter.

Now this was NO ordinary van as it was decked out with ports to charge your paraphernalia and get this, equipped with a YES Zoom! It’s a unit mainly used for homes, plus you can just hook up a regular telephone line and wa-la, instant phone access!

Posted on March 23, 2011, in Uncategorized. Bookmark the permalink. Leave a comment.

← Pause …
The Simplicity of Repetition →